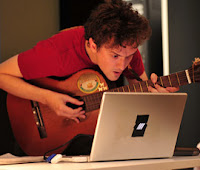 During my Friday morning class on Technological Innovations Management, the teacher welcomed a guest speaker: Thomas Bonte. Almost graduated from UGent, he stopped his engineering program to pursue his entrepreneurial idea. At first, there was a problem that most of musicians experience when they look for new songs to play: they would buy a big expensive book which is not really practical and not really the format they need — music scores are different for piano, guitar, flute, etc. Thomas' idea was to provide an online database of music scores for piano players, based on the exchange in between users. 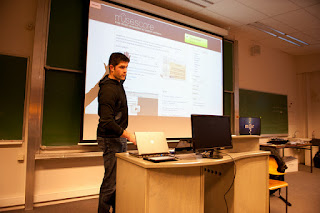 In 2006, the entrepreneur in collaboration with others from Ghent institutions created Wikifonia. It was an online sheet music database using the Wikipedia system of sharing knowledge, where users could upload, collaborate, comment and download music scores for piano in Pdf or MusicXML formats. Even though this website is still running and users still register to share their music, Thomas Bonte continued to pursue his idea further. He wanted to design a software where it could be possible to edit the music score.

Thomas Bonte (BE), Werner Schweer (DE) and Nicolas Froment (FR) launched MuseScore in 2008. This free open-source musical notation program (available on Apple, Windows and Linux OS) revolutionized the music score writing market, previously divided between Sibelius and Finale. These softwares allow the users to create, edit and print various types of musical scores. The sheet music can be played back by the user through the built-in sequencer and sample library. It is also available for tablets and smartphones. Of course, everything can be exported, shared over social networks and played back by anyone. Finally, MuseScore is available in 48 languages.

In 2011, a project was launched to create high-quality print and audio versions of the Goldberg Variations — composed by J.S. Bach. A Kickstarter campaign was launched and they got the necessary $15 000 to develop the project. Thomas Bonte and the rest of MuseScore developers collaborated to create both an engraved score and an audio recording of the song performed by the musician Kimiko Ishizaka (see video below). The final engraved score was created entirely in MuseScore, and is available for download free of charge.

Money wise, the developers are still a small team of 3 and they get their salaries from the users upgrading their account to Pro for $49 a year. This is necessary to go beyond the limit of 5 uploads if the user wants to share more music scores. Now, MuseScore 2.0 is under development and Thomas Bonte is still raising funds to continue the projects.

MuseScore, a really interesting entrepreneurial and technological innovation that I'll keep track on!